Just using an off-the-shelf library like libcoroutine isn’t as fast as you might think. The graph below shows the huge performance degradation of a naive implementation of coroutines (the short red bar) compared to the old callback- based code (the blue bar on the left). But with the right set of optimizations, we can recover a level of performance about equal to the non- coroutine version. With these optimizations, throughput is recorded as the pink bar on the right, which is within the margin of error of the original version. 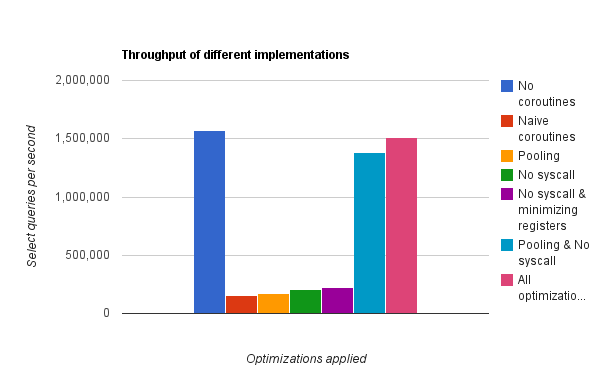 Spawning a new coroutine with libcoroutine on Unix issues the following actions:

When the user code terminates, all of these structures have to be deallocated. Unless our allocator is perfect (which it isn’t) and the ucontext routines are really fast (which they aren’t), this constitutes a lot of waste since each select request issues multiple coroutines. Why not reuse the same coroutine object for multiple actions?

The logic is simple. Each OS thread has a list of free coroutines. To do something in a new coroutine, the user pops an item off the free list and sends it a message containing the action. Each coroutine has a ‘run loop’ which does the following:

If a coroutine is requested and the free list is empty, a new coroutine executing that run loop is spawned and pushed onto the list.

Once old coroutines are reused, the only frequent call into libcoroutine that gets made is switching contexts. Ultimately, this calls the ucontext routine swapcontext. What does that do exactly? Well, here’s the glibc 2.12.2 implementation for x86-64:

(The o* symbols are #define‘d in another file to be offsets into the ucontext_t struct.)

The final sin–making an unnecessary syscall–is the greatest, and eliminating this provides a big speed boost. On top of this, it helps to eliminate the memory traffic from saving and restoring the unnecessary registers.

I made one minor optimization across all of these: stacks were malloc‘ed rather than calloc‘ed, since there’s no reason that they have to be zeroed beforehand. It turns out that this isn’t crucial to performance once pooling is applied; it just reduces the warmup time. Reducing the size of the callstacks is similar–with pooling, it just reduces warmup time. Without pooling, both of these optimizations yield significant improvements in throughput. It still might be a good idea to have small callstacks so that they don’t take up too much memory, but this is not a problem right now. In practice, warmup time will be dominated by disk I/O in filling up the in- memory cache, and the database will be restarted only rarely.

Coroutines can be made to work fast, though it’s not as immediate as one might hope. The POSIX primitives aren’t optimal for all applications. I’d like to thank Andrew Hunter for giving me advice on how to proceed in this optimization process.