Turtl is an open source note-taking application built with RethinkDB. It uses encryption to protect user content, which can include notes, passwords, bookmarks, and images. Turtl is the creation of developer Andrew Lyon. Users can download the source code and run their own instance of the application, or they can register an account on a hosted service operated by Andrew’s independent software company.

Turtl’s API backend is implemented in Common Lisp, with an intriguing stack that Andrew largely built himself. He created his own asynchronous HTTP server framework called Wookie, which is powered by an event-driven asynchronous IO library that he wrote on top of Node’s libuv. He also made his own Common Lisp RethinkDB client driver, which the Turtl backend uses to communicate with a RethinkDB cluster for data persistence.

The Turtl user interface is built with JavaScript and HTML. Although it’s built with web technologies, there’s no browser-based frontend for various security reasons. Users can install desktop and mobile clients, which all provide thin native wrappers around the web content. On the desktop, the client is built with NW.js, which combines a Node runtime and Blink-based HTML rendering engine. There’s also a Cordova-based Android client, with support for iOS planned in the future.

The client application synchronizes with the backend, using encryption to securely store and transmit data. On the client side, it keeps the user’s data in IndexedDB. Each individual note and board has its own encryption key, which makes it possible for multiple users to securely share boards with other users.

When the user runs the Turtl client application, they can configure it with the address of the backend server that it should use for synchronization. By default, it will point to the hosted service, but users can easily give it the address of their own self-hosted instance.

The Turtl note list uses a Pinterest-style dynamic grid, with staggered blocks that are reflow to fit the space. Users can hit the plus button on the bottom right-hand corner in order to add a new item. The application supports Markdown for formatted text content. When authoring a note, the user can optionally add tags and assign it to a board. The application includes several other noteworthy features, including full-text search. 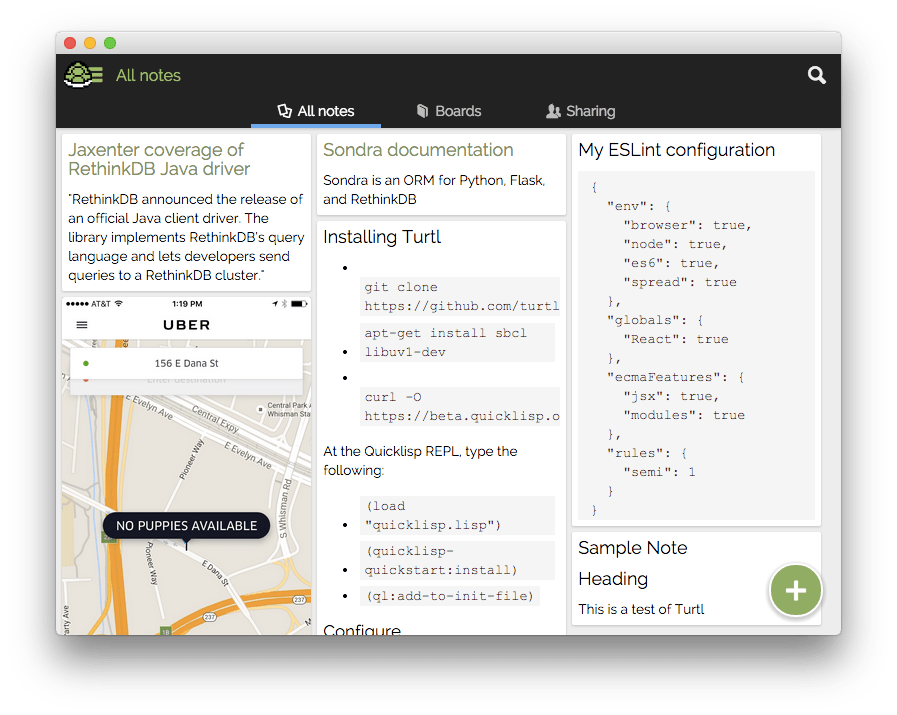 The roadmap for upcoming features includes support for importing and exporting notes and integration with platform sharing features in the mobile clients. You can follow Turtl feature development by visiting the project’s Trello board.

Want to run your own instance of Turtl? Start by installing RethinkDB and then check out the setup instructions on the Turtl website.