BeerThink: infinite scrolling in a mobile app with Ionic, Node.js, and RethinkDB

Developers often use pagination to display large collections of data. An application can fetch content in batches as needed, presenting a fixed number of records at a time. On the frontend, paginated user interfaces typically provide something like “next” and “previous” navigation buttons so that users can move through the data set. In modern mobile apps, it is increasingly common to implement an infinite scrolling user interface on top of paginated data. As the user scrolls through a list, the application fetches and appends new records.

To demonstrate the use of pagination in RethinkDB applications, I made a simple mobile app called BeerThink. It displays a list of beers and breweries, providing a detailed summary when the user taps an item. The app uses a data dump from the Open Beer Database, which contains information about roughly 4,400 beers and 1,200 breweries. I converted the data to JSON so that it is easy to import into RethinkDB. There are two tables, one for beers and one for breweries. The application uses RethinkDB’s support for table joins to correlate the beers with their respective breweries.

BeerThink’s backend is built with Node.js and Express. It exposes beer and brewery data retrieved from a RethinkDB database, providing a paginated API that returns 50 records at a time.

The BeerThink frontend is built with Ionic, a popular AngularJS-based JavaScript framework designed for mobile web apps. BeerThink uses an infinite scrolling list to present the beers in alphabetical order.

BeerThink’s architecture aligns with the API-first approach used by many modern mobile web applications. The backend is solely an API layer, completely decoupled from the frontend. The frontend is a single-page web application designed to consumes the backend API. This particular approach makes it easy to build multiple frontend experiences on top of the same backend. You could, for example, easily make native desktop and mobile applications that consume the same backend API.

This tutorial demonstrates how BeerThink’s pagination works at each layer of the stack: the RethinkDB database, the Node backend, and the Ionic client application. 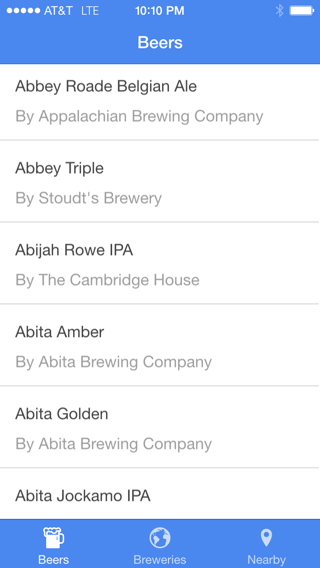 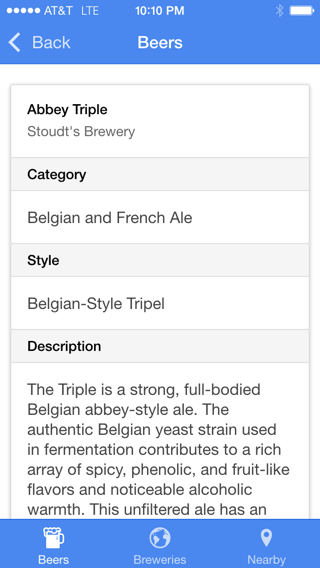 If you’d like to follow along and try the pagination queries yourself, create a table and then use the r.http command to add the beer list to a database:

To efficiently alphabetize and paginate the beer list, you first need to create an index on the name property:

After creating the index, you can use it in the orderBy command to fetch an alphabetized list of names:

When paginating records from a database, you want to be able to obtain a subset of ordered table records. In a conventional SQL environment, you might accomplish that by using OFFSET and LIMIT. RethinkDB’s skip and limit commands are serviceable equivalents, but the skip command doesn’t offer optimal performance.

The following example shows how to use the between command on the name index to get all of the beers between “Petrus Speciale” and “Plank Road Pale Ale” in alphabetical order:

When the BeerThink application starts, it uses orderBy and limit to fetch the first page of data. To get subsequent pages, it uses the between and limit commands. The value that the program supplies for the between command’s start position is simply the index of the very last item that was fetched on the previous page.

The example above shows how to fetch 50 records, starting from a particular beer. Because the program doesn’t actually know what beer will be at the end of the new page of data, the between command is given null as its closing index value. That will cause the between command to return everything from the start index to the end of the table. The query uses the limit command to get only the desired number of records.

Setting the value of the leftBound option to open tells the between command to omit the first record, the one that we use to define the start index. That’s useful because the item is one that you already have at the end of your list—you don’t want to add it again.

The between command is a good way to implement pagination in many cases, but it isn’t universally applicable. There are cases where you won’t have the last item of the previous page to use as a starting point.

Consider a situation where you want the user to be able to visit an arbitrary page without first iterating through the entire set. You might, for example, want to build a web application that accepts an arbitrary page number as a URL path segment and returns the relevant results. In such cases, the best approach is to use the slice command.

The slice command takes a start index and an end index. To get 50 records that are 3000 records down from the top of the table, simply pass 3000 and 3050 as the parameters:

When the user requests an arbitrary page, you simply multiply by the number of items per page to determine the slice command’s start and end positions:

In the example above, use the desired values for pageNumber and perPage. Although the slice command isn’t as fast as using between and limit, it is still much more efficient than using the skip command.

The BeerThink backend is built with Node and Express. It provides simple API endpoints that are consumed by the frontend client application. The /beers endpoint provides the list of beers, 50 records at a time. The application also has a /breweries endpoint that similarly displays a list of beers.

For pagination, the user can optionally pass a last URL query parameter with the name of the most recently-fetched item. Both API endpoints support the same pagination mechanism. Taking advantage of the ReQL query language’s composability, I generalized the operation that I use for pagination into a function that I can apply to any table index:

In the /breweries endpoint, apply the paginate function to the breweries table. Use the req.param method provided by Express to get the URL query parameter that has the value of the last list item. If the user didn’t provide the URL query parameter, the value will be undefined. All you have to do is run the query and give the user the JSON results:

The /beers endpoint is implemented the exact same way as the /breweries endpoint, using the same paginate function that I defined above. The query is a little more complex, however, because it has to use an eqJoin operation to get the brewery for each beer:

Even though the two endpoints used different queries, the same pagination function worked well on both. Abstracting common ReQL patterns into reusable functions can greatly simplify your code. If you wanted to make it possible for the client specify how many records are returned for each page, you could easily achieve that by taking another request variable and passing it to the paginate function as the value of the limit parameter.

Slice-style pagination on the backend

Although the between command is the best approach to use for pagination in the BeerThink application, the slice command is also easy to implement on the backend. I’ve included a brief explanation here for those who would like to see an example.

When you define a URL handler in Express, you can use a colon to signify that a particular URL segment is a variable. If you define the breweries endpoint as /breweries/:page, the page number passed by the user in the URL segment will be assigned to the request’s page parameter.

In the handler for the endpoint, use parseInt or a plus sign to coerce the page number into an integer that can be passed into the ReQL query. Next, use the orderBy command to alphabetize the breweries. Finally, use the slice command with the page number and item count to fetch the desired subset of items.

If the user browses to /breweries/3, the application will give them the third page of brewery data formatted in JSON. In the example above, you might notice that the code assigns a default value of 1 to the pageNum variable if a page number wasn’t provided with the request. That makes it so visiting /breweries by itself, without a page URL segment, will return the first page of data.

Consuming the paginated API in Ionic

Now that the endpoint is defined, the client can simply iterate through the pages as the user scrolls, adding each page of data to a continuous list. It’s especially easy to accomplish with Ionic, because the framework includes an AngularJS directive called ion-infinite-scroll that you can use alongside any list view to easily implement infinite scrolling:

In the associated AngularJS controller, the fetchMore method uses the $http service to retrieve the next page of data. It passes the name property of the most recently-fetched list item as the last URL query parameter, telling the backend which page to return.

Each time that the fetchMore function retrieves data, it appends the new records to the items scope variable. If the backend returns no data, the application assumes that it has reached the end of the list and will stop fetching additional pages. Similarly, it will stop fetching if it encounters an error. In a real-world application, you might want to handle errors more gracefully and make it so that the user can force a retry.

The ion-item element in the HTML markup is bound to the items array, which means that new records will automatically display in the list. When I first built the application, I originally implemented the repeating list item with Angular’s ng-repeat directive. I soon discovered that ng-repeat doesn’t scale very well to lists with thousands of items—scrolling performance wasn’t very good and switching back from the beer detail view was positively glacial.

I eventually switched to Ionic’s relatively new collection-repeat directive, which is modeled after the cell reuse techniques that found in native mobile frameworks. Adopting collection-repeat substantially improved scrolling performance and eliminated detail view lag. If you are building mobile web apps with infinite scrolling lists that will house thousands of items, I highly recommend collection-repeat.

The application has a number of other features that are beyond the scope of this article, but you can get the source code from GitHub and have a look if you would like to learn more.

Install RethinkDB and check out the 10-minute intro guide to start building your first project.