We’re pleased to announce today that RethinkDB is now available for Windows. You can download a Developer Preview of our Windows build, which runs natively on Microsoft’s operating system.

Support for Windows is one of the features most frequently requested by RethinkDB users. We launched an ambitious engineering project to port RethinkDB to Windows–an undertaking that required a year of intensive development, touching nearly every part of the database.

To try today’s Developer Preview, simply download RethinkDB as an executable and run it on a Windows machine. We’re making the preview available today so that our users can start exploring RethinkDB on Windows and help us test it in the real world. You shouldn’t trust it with your data or use it in production environments yet. It’s also not fully optimized, so you might not get the same performance that you would from a stable release.

Starting with the upcoming RethinkDB 2.3 release, we’ll provide official Windows builds for each version of RethinkDB alongside our binary packages for Linux and Mac OS X. Any developer who wants to build RethinkDB applications on a Windows PC can get started more easily than ever before, developing locally without provisioning a Linux server or relying on cloud hosting providers. As our Windows support continues to mature, developers can look forward to deploying RethinkDB natively in Windows Server environments.

Under the hood, RethinkDB includes a tremendous amount of low-level plumbing built on platform-specific APIs. We decided early in the project that we would not settle for less than full, native Windows support. You won’t find any POSIX compatibility layers or other similar hacks–RethinkDB uses native Windows APIs on the Windows platform.

Some key areas that required considerable engineering effort include threading, disk and network I/O, and the event loop. The underlying APIs that developers use to perform asynchronous I/O on Windows differ from their Linux counterparts in some notable ways. On Linux, developers use epoll to get notifications that let them know when a descriptor is ready for reading or writing. On Windows, developers use I/O Completion Ports (IOCP), which entails queuing up asynchronous operations that emit notifications when they succeed or fail.

We considered adopting Node’s libuv as a cross-platform abstraction layer for asynchronous I/O, but many of the underlying design decisions in libuv clash with decisions that we’ve made in the RethinkDB core. Ultimately, using an abstraction layer like libuv would have required us to make more changes to code that we currently share between Windows and Linux. We chose instead to manually add Windows-compatible code paths to handle the platform-specific I/O.

We also had to incorporate Windows into our build system and get the database to compile natively with Microsoft’s own C++ compiler. The build system work proved especially taxing, because we had to ensure that all the third-party open source libraries we use in the database build consistently on Windows as well as Linux and Mac OS X.

Build a RethinkDB app on Windows in Visual Studio

If you’re a seasoned .NET developer and you want to get started with RethinkDB, check out the C# client library created by Brian Chavez. Brian based his C# library on our own official Java driver, which we released in December.

To demonstrate how to build RethinkDB applications on Windows in Visual Studio, we built a simple ASP.NET chat demo with SignalR and Brian’s C# RethinkDB driver. SignalR is a framework for performing realtime updates in ASP.NET. It uses WebSockets to bind a JavaScript frontend with an ASP.NET backend, providing an abstraction layer for RPC and event propagation.

You can use NuGet to add the RethinkDB driver and SignalR to your ASP.NET project: 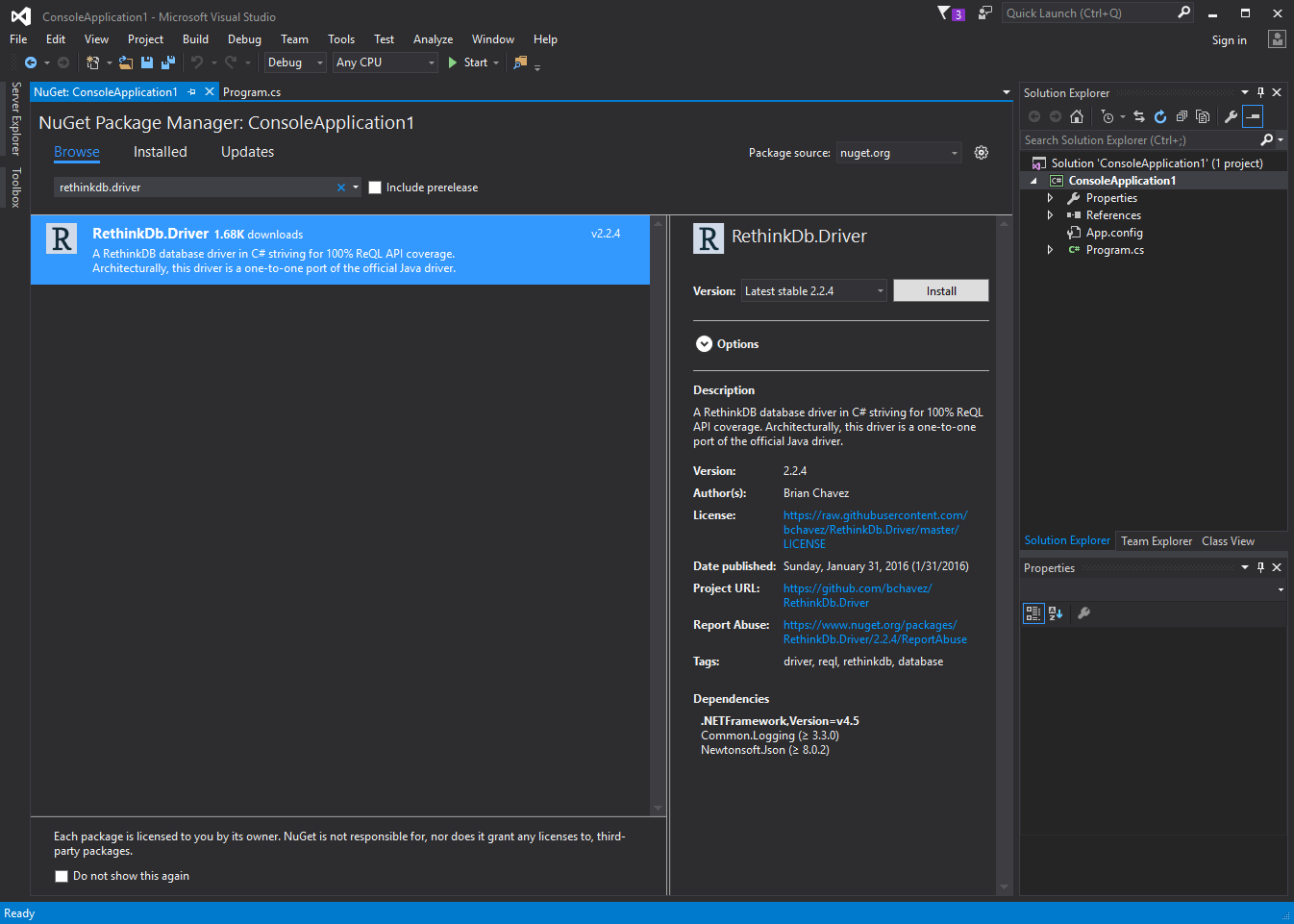 When you use SignalR, you create C# “hub” objects with methods that are remotely accessible from the frontend. The hub in our chat demo has a method called Send that adds new messages to the database. It uses the RethinkDB client library to establish a connection with the database cluster and insert a new record. Each record includes three properties: the name of the user, the text of the message, and a timestamp.

In the frontend HTML file, you can use the SignalR client library to connect to the hub and invoke the Send method exposed by the ChatHub class. SignalR automatically handles the remote procedure call (including serialization of the parameter values on both sides), making it possible to transparently call backend C# methods on the client:

Now that you have the code in place to add new messages to the database table, you want to make the ASP.NET backend broadcast each new message to all of the connected users.

When you perform a RethinkDB query that includes the changes command, the database will automatically push you updates to the query result set. You can use a changefeed to track each new record added to the database’s message table. The following C# class on the backend sets up a changefeed and uses the ChatHub to broadcast new messages to the frontend:

On the frontend, you can attach a JavaScript function to the onMessage event. The function will execute every time the backend calls the onMessage method:

In our sample demo, we built the user interface for a frontend client with Vue.js, a lightweight MVC framework that supports data binding. You could just as easily use React or Knockout if you prefer. 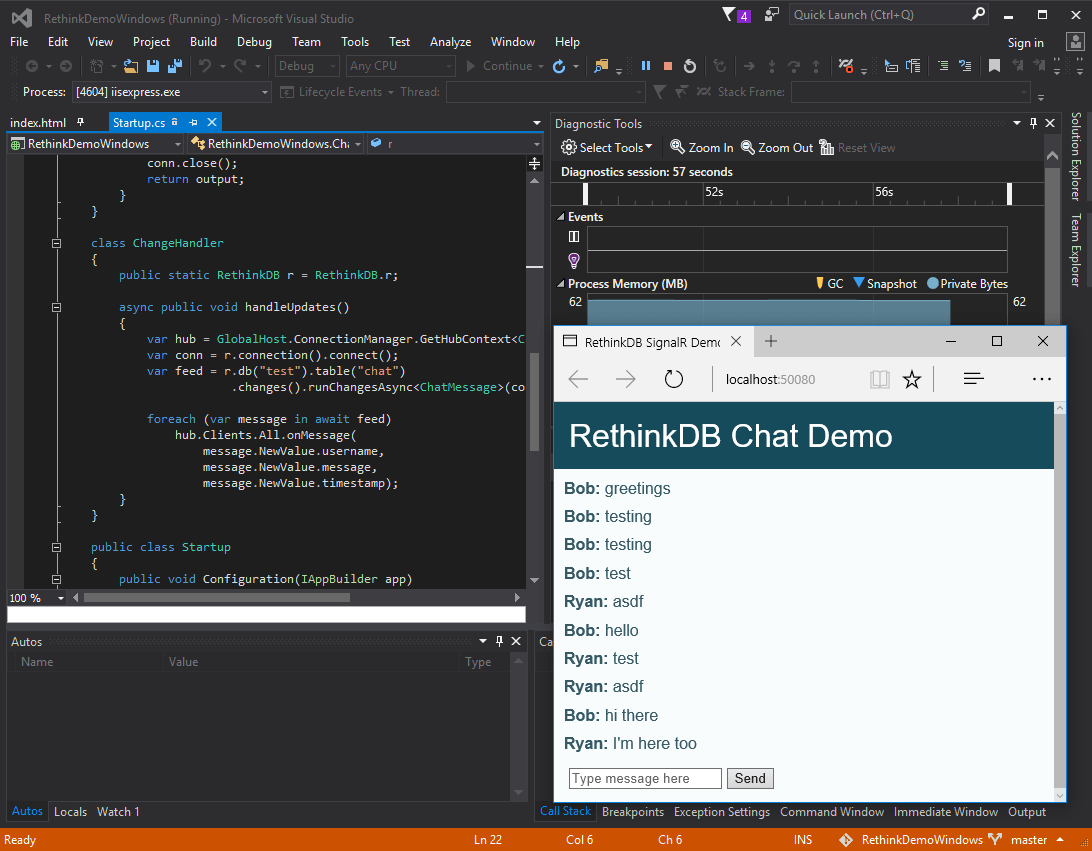 To see the application in action, you can download the full source code from GitHub and run it yourself in Visual Studio.

If you’d like to get started with RethinkDB on Windows, download the Developer Preview today. After you run the database, you can follow our ten-minute guide to learn more.

Want to help us make RethinkDB better? You can join the development process on GitHub. We’re looking forward to receiving bug reports and other feedback as users test the new Windows build.