RethinkDB 2.2 includes over 120 enhancements, significantly improves performance, memory usage and scalability, adds new ReQL commands, and ships with atomic changefeed support. Some of the major improvements in the 2.2 release include:

Prior to RethinkDB 2.2 you could accomplish it by running two separate queries: one to fetch initial data, and another to listen to changes.

There are two problems with this approach. First, you have to write two different pieces of code: one to handle the initial data, and one to handle the changes. While this doesn’t present any insurmountable challenges, having to write code twice to process every piece of realtime data quickly becomes a significant burden in applications that heavily rely on realtime functionality.

The second problem is more serious – the code above contains a race condition. There is a small gap between the time you get the initial results and the time you subscribe to a feed, and new data might slip in between the two queries. When that happens, you end up missing the change, and your users are left with inconsistent information.

The availability of initial changefeed results simplifies realtime application development for many RethinkDB users, but it’s especially worth noting that this feature brings us one big step closer to accommodating the requirements of the popular Meteor framework, and paves the way for a robust Meteor integration.

In previous versions of RethinkDB, changefeeds automatically included initial results for some queries (those using orderBy.limit or get) but not others, and there was no way to control this behavior. In RethinkDB 2.2, changefeeds only emit their initial results by default if you explicitly set includeInitial to true, and the option is now available on all changefeeds.

Note: this is a breaking change. Please update your applications to explicitly turn on includeInitial when you need it.

You can expect to see major performance gains for between operations that rely on secondary indexes. In our internal benchmarks, a query that uses an index to count a million items went from 1.3 seconds in RethinkDB 2.1.0 to 0.5 seconds in 2.2. 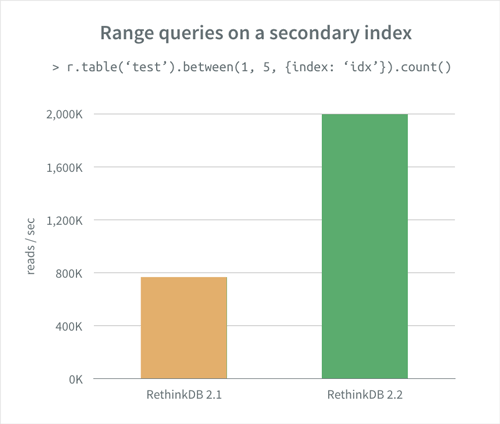 We also worked to deliver better performance in cases where users stream large data sets with the Python client driver. An operation that involves reading 1 million documents that are roughly 200 bytes each went from 20 seconds in version 2.1.0 to 9.1 seconds in version 2.2.

Community member Adam Grandquist contributed code that extends the Python client driver so that users can plug in third-party JSON parsing libraries like RapidJSON for faster document decoding. When we added RapidJSON to our benchmark configuration, the completion time of the million document benchmarked dropped even further, down to 6.7 seconds.

The performance of fetching a large number of documents is improved even further if you’re running a RethinkDB cluster. Table scans across multiple RethinkDB servers are now done in parallel, and you can expect linear scalability on table scans as of RethinkDB 2.2. 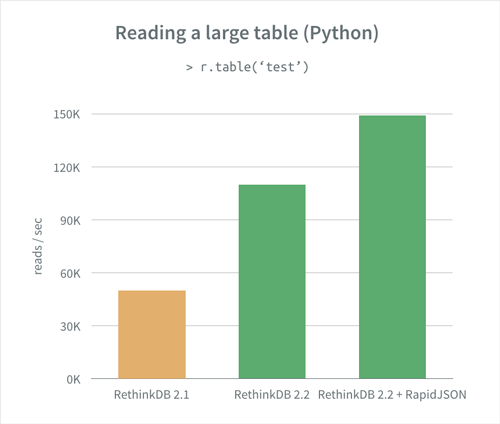 The performance of the getAll command has also been significantly improved since releasing RethinkDB 2.1 three months ago. If you’re using getAll with multiple keys, you can expect performance improvements of up to 8x on common workloads. 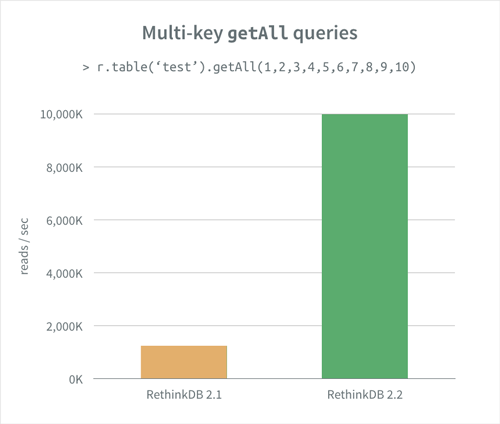 We’ve also significantly reduced the memory overhead incurred when working with large datasets that are too big to fit in memory. The memory overhead in these cases has been reduced by over 50%. New tables will automatically benefit from this improvement.

RethinkDB 2.2 dramatically reduces the performance impact of creating a new secondary index. We’ve redesigned the index construction process to run at background priority, and to use less memory while running on a production system. Additionally, you can now restart your servers in the middle of an index construction and it will resume where it left off.

While most of the work in the 2.2 release was focused on atomic changefeeds and performance improvements on high-scale workloads, we’ve also added new ReQL commands that should make using RethinkDB more convenient.

In RethinkDB 2.2 we added a new values command that mirrors the existing keys command and allows getting field values from an object:

We’ve also added a way for clients to determine which RethinkDB server they’re connected to. You can call conn.server to get the server information on a connection.

We’re also really excited about the Slack group for the RethinkDB dev community. We launched the group a month ago as an experiment, and it’s growing quickly and has become an indispensable part of the community.

We’d love for you to join the Slack group, but if that’s not your cup of tea don’t worry – the development team is still on #rethinkdb on IRC.

For more details check out the official release notes. To try the new release for yourself, download and install it today.

Special thanks to all the amazing contributors, users, and community members who helped improve the 2.2 release!