Today, we’re happy to announce RethinkDB 1.16 (Stand by Me). Download it now!

The 1.16 release is a precursor to the upcoming 2.0 release, and is the biggest RethinkDB release to date with over 300 enhancements. This release includes two exciting new features: a comprehensive API for large cluster management, and realtime push functionality that dramatically simplifies the development of realtime web apps.

The cluster management API builds upon the sharding and replication functionality in previous versions of RethinkDB, and adds complete control and visibility into the operational details. It includes:

The realtime push functionality is the start of an exciting new database access model – instead of polling the database for changes, the developer can tell RethinkDB to continuously push updated query results to applications in realtime. We dramatically expanded the changes command to support the following queries: 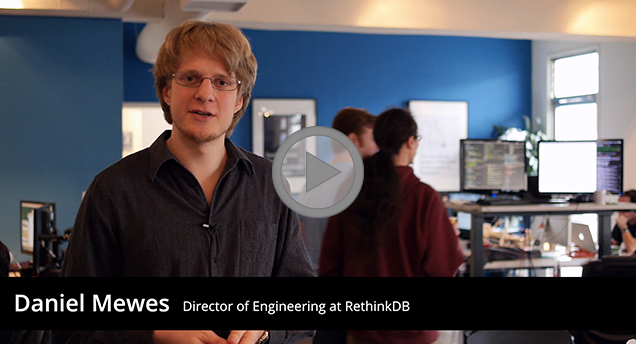 Note: In RethinkDB 1.16 the rethinkdb admin command has been removed and replaced with the new ReQL management API.

As of this release, you can now perform cluster management tasks with ReQL queries in a REPL or with scripts written in any programming language that has a RethinkDB driver.

ReQL’s createTable command now accepts two new optional arguments: shards and replicas. If you specify the sharding and replication factor, the database will automatically partition and distribute the table. You can modify the settings later by calling the reconfigure command on the table object. You can also optionally use tagging to explicitly control how many replicas are assigned to individual servers:

The web UI has been completely rebuilt to take advantage of the new ReQL clustering API. We’ve also updated the sharding and replication web interface to give administrators more visibility and control:

As you change the number of shards and replicas, RethinkDB presents a visual diff of the current and proposed cluster configurations. Administrators can see exactly where the data will go before approving the proposed plan.

RethinkDB 1.16 introduces a number of system tables that expose database settings and the internal state of the cluster. You can query and interact with system tables using conventional ReQL commands, just like you would with any other RethinkDB table.

When you modify those properties using the update command, the cluster will apply the new settings. You can also use this approach to tweak some advanced table settings for behaviors like durability.

The high-level reconfigure command is a porcelain command on top of the table_config system table. When you call reconfigure, the command compiles high-level settings like the number of shards and replicas into a concrete configuration document, and updates the appropriate document in the table_config system table. You can also call reconfigure with a dry_run optional argument to see the proposed configuration before applying it.

Using the high-level configuration commands and the finer-grained control offered by table_config, you can create elaborate scripts that automate much of your cluster configuration in a testable, repeatable way.

Alongside the configuration table, RethinkDB 1.16 also introduces several new read-only tables that you can query to get detailed information about the status of the cluster:

Another much-anticipated feature in RethinkDB 1.16 is support for managing long-running operations. The new jobs table shows all of the background tasks and queries in progress on your cluster. A typical document in the jobs table might look like this:

If you want to terminate a query, simply delete the corresponding row from the table:

Instead of polling the database for changes, you can now tell RethinkDB to continuously push updated query results to applications in realtime. This is the start of an exciting new database access model that should make building modern, realtime apps dramatically easier.

For example, suppose you’re building a realtime leaderboard for a game. You can get started with the database by using a familiar request-response query paradigm:

As of RethinkDB 1.16, you can also ask the database to push changes to your app every time a gameplay that modifies the leaderboard is recorded in the database:

The first result of the query is just the top five gameplays. However, when the developer tacks on the changes command, RethinkDB will keep the cursor open, and push updates onto the cursor any time a relevant change occurs in the database. The expanded changes command works on a wide variety of queries:

It also includes bells and whistles like latency awareness, that make building realtime apps much more convenient. For example, if the query results change too quickly and you don’t want to update the DOM more frequently than every fifty milliseconds, you can tell changes to squash updates on a fifty millisecond window, and the database will take care of aggregating diffs and removing duplicates:

To learn more about how the changes command can make building realtime apps dramatically easier, read our post “Advancing the realtime web”.

The new features in the 1.16 release can be used together in composable ways. For example, you can attach changefeeds to queries performed on the system monitoring tables in order to get live updates about the state of the cluster.

For example, if you want to create an animated line graph of operation statistics for all tables in your production database, you could set up a feed on the internal statistics table to monitor the RethinkDB cluster itself:

You can set up changefeeds on other system tables like jobs, logs, and server_status to get a realtime stream of updates on the state of the cluster.

There are many other exciting improvements in this release:

For a full list of over 300 improvements, see the changelog.

The team is already hard at work on the upcoming 2.0 release. The 2.0 release will focus on operational and API stability, and will be the first production-ready release of RethinkDB. As always, if there is something you’d like us to prioritize or if you have any feedback on the release, please let us know.

Help work on the 2.0:release: RethinkDB is hiring.